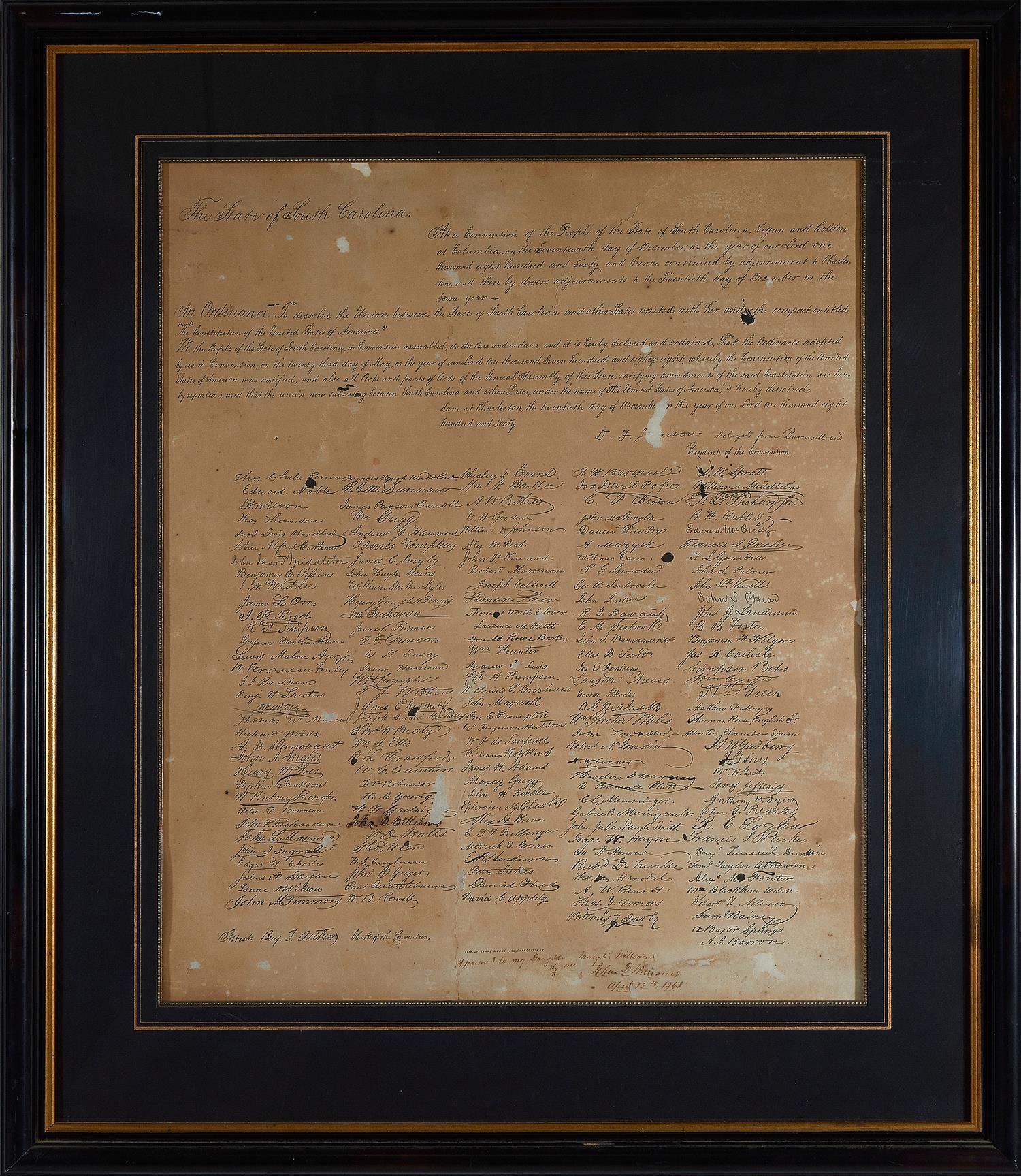 South Carolina Ordinance of Secession, with Dedication by Signer

South Carolina Ordinance of Secession, with Dedication by Signer

South Carolina Ordinance of Secession, with Dedication by Signer December 17-20, 1860,
At a convention of the People of the State of South Carolina, begun and holden at Columbia, on the Seventeenth day of December, in the year of our Lord one thousand eight hundred and sixty, and thence continued by adjournment to Charleston, and there by divers adjournment to the Twentieth day of December in the same year.

D. F. Jamison Delegate from Barnwell and
President of the Convention

and dedicated in ink: A present to my Daughter Mary E. Williams, by John D. Williams, April 12th 1861

Other Notes: One of approximately 200 copies lithographed by Evans & Cogswell in early 1861 for the 170 signers of the document and owned by one of the signers. Evans & Cogswell also advertised in the 15 April 1861 issue of the Charleston Courier that souvenir "copies of 'South Carolina Ordinance of Secession'" were for sale at their business at 3 Broad Street. This copy, however, was likely the one that John Drayton Williams (1798-1870), one of the five signers from Laurens District, received as a member of the Secession Convention. He inscribed the document to one of his daughters, Mary Elizabeth Williams (1835-1863) on 12 April 1861, the day that South Carolina troops began the bombardment of Fort Sumter in Charleston, an attack that resulted in the beginning of the Civil War. Mary Williams married Robert Garlington, a professor at Newberry College, in 1861 or 1862, but died in June 1863 without leaving any children. The ordinance may have been passed on to her youngest sister, Phoebe Young Williams (1848-1924), who later married Dr. James H. Witherspoon of York, South Carolina.
Over the past thirty years, only a handful of copies of the South Carolina ordinance have been offered at auction, and none have been a presentation copy signed and dated by a member of the convention. Williams apparently also resigned the document over his facsimile signature in the body of the ordinance.